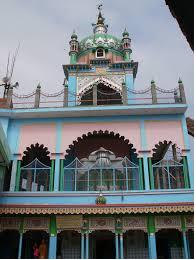 Pilibhit district and Pilibhit city in Uttar Pradesh has a wide collection of religious places. These places are famous for being popular holy shrines as well as for being good tourist spots in the area. One of the most believed and pious holy shrine is the dargah of qutebe Pilibhit Hazrat Kibla Haji Shah Ji Mohammad Sher Mian Sahib Rahmat Ullah Aleh which has special value and popularity attached to it. It attracts devotees from all over Pilibhit area and beyond it.

A Sufi Islamic shrine built over the graveyard of a religious figure like a Sufi saint is often termed as Dargah which is derived from a Persian word and it is a popular term in Persian influenced Islamic world. This place of worship usually includes mosques, meeting place, medication, Islamic religious schools and small residences for teacher and caretaker. There may be other buildings also for community purposes.

Dargah of Hazrat Shah Ji Miyan is in the north of Pilibhit city. Alaa Hazrat was considered the greatest aalim of that time and Shahji Miya was the greatest wali and faqir. It is their friendship and their greatness which is celebrated in this Dargah.

There are many stories of the greatness showered by Alaa Hazrat and Shah Ji Miyan. As per the local belief these two great souls were best of friends. Once both Alaa Hazrat and Shah Ji Miyan were sitting together when a common man came running to Alaa Hazrat and kneeling down before him in a hurtful voice requested him to search his wife, who was untraceable for two days with no news. The man was really stressed and puzzled with the situation. However, Alaa Hazrat listened to him carefully consoled him and closed his eyes for few minutes. As soon he opened them he informed the man that his wife is grinding flours by her hand in a local restaurant in Delhi. The man was astonished and requested Alaa Hazrat to bring her back anyways. But Alaa Hazrat informed that he cannot do that as it is the job of Shah Ji Miyan. As Shah Ji Miyan closed his eyes and opened them after few seconds he informed the man that his wife was waiting for him behind the Masjid and asked him to take her. As the man went behind the Masjid, he found his wife waiting with hands filled with flour.

Dargah of Hazrat Shah Ji Miyan is one of the most popular religious places in the country. It is so well known that devotees from various other states across the country and even from different countries of the world come here to visit the Dargah. It is the popular belief that offering a chadar (a long piece of cloth) at the Dargah can be very fruitful for the person offering. For eternal peace, for healthy life and to fulfill other wishes, many believe this Dargah is the best to offer prayers. It is a place of social harmony.

How to Reach Dargah of Hazrat Shah Ji Miyan

It's a 8 to 9 minute distance (around 4-5kms) from Pilibhit Railway Junction through station road. One can take any local conveyance or may take a rickshaw to visit the Dargah.