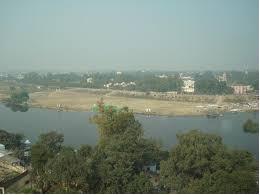 Situated in the Rohilkhand region of sub Himalayan Plateau, Pilibhit is the north-eastern most district of Bareilly division. It is one of the forest rich areas of Northern India along with almost ten small or medium water bodies. Some of the famous rivers that flow in and around Pilibhit district and Pilibhit city have important contribution to the society. There is River Sharda flowing through eastern part of the district, River Devhauti Ganga, which flows through north western part of Pilibhit city and River Ghaghara flowing through north eastern part of the city. Apart from this there is the presence of River Gomti, Gomati or Gumti which originates from this beautiful place and later forms a major tributary of River Ganges.

The origin of River Gomti can be traced from a small lake situated in a place named Madhotanda which is a part of Puranpur tehsil region. This small lake is named as Gomat Taal. Situated at a distance of 7km east of Pilibhit city, this particular lake or reservoir is also named as Fulhaar Jheel. Originating from here the River Gomti flows for a distance of around 900 km through Uttar Pradesh till it reaches River Ganges near Saidpur, Kathi in Ghazipur. Many stories regarding both the sacred river and its originating place are popular among the locals of Pilibhit.

According to the local belief and Hindu mythology the river has a sacred origin. It is considered to be the daughter of Sage Vashist, who was one of the Saptarishis (Seven Great Rishis or saints) and a manasputra of God Brahma. Due to its religious significance the waters of the Gomat Taal and of River Gomti is considered sanctimonious. It is the common belief that on Ekadashi which is the eleventh day of Santana Dharma in Hindu calendar, the waters of the river becomes extremely pious and that is why taking a bath in this water on that day can wash away all sins of human life and can give a blessed future. Many devotees during the solar eclipse come to this place to take a holy bath in Gomat Taal and feel blessed as they consider taking a bath here is as pious as taking a bath in any rivers of Kurukshetra.

Apart from the religious point of view, this is a beautiful location where the natural beauty takes its peak. One of the popular tourist destinations this is a place not to be missed while a visit to Pilibhit.

The best time to visit Gomat Taal in Pilibhit is the winter season especially in the month of November and February when the weather is moderate in the region. Cool breeze and pleasant weather makes the ambience for sightseeing in its best.

How to Reach Gomat Taal in Pilibhit

Driving through NH730, this is 49kms distance from Pilibhit Junction Railway Station and the ideal time taken would be no more than an hour. One can also travel through SH26 to reach the destination. There are various prepaid taxis which can be booked with reasonable charges to visit the spot.