With the division of Uttarkhand and Uttar Pradesh, the later state loosed out on Corbett Tiger Reserve, which due to geographical limitations became a part of Uttarkhand state. At this scenario, the Uttar Pradesh government was always keen on promoting Pilibhit Tiger Reserve because it had huge potential with special ecosystem, enormous grasslands, open space and enough food for predators. The Pilibhit forest has not less than 36 tigers with good predator base as well as it is a habitat for not less than 127 animals, 556 bird species and not to forget over two thousand flowering plants. It may be noted that almost 6 million people depend on them for their living in some way or other. 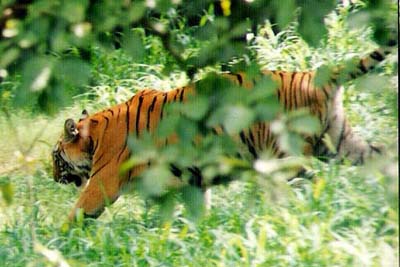 It was in 2005 when the potential of this place was recognized and a proposal for a home of these endangered cats was created. Though a lot of factors were favorable, but still considering all the pros and cons of the area, the proposal was submitted to the Government of India in April 2008. As soon as the approval was received, Pilibhit Tiger Reserve came into existence in September 2008.

Situated in the foot hills of Himalayas along the India-Nepal border and spread over parts of three major districts of Uttar Pradesh, Lakhimpur Kheri, Bahraich district and Pilibhit district is the popular Pilibhit Tiger Reserve. It is one of the well forested districts of state Uttar Pradesh where 23% of the total district area remains covered with forests. Pilibhit forest is in true terms a part of Terai forest region and one of the apt examples of diverse and productive Terai eco system. Pilibhit Tiger Reserve is well bounded by water bodies from all ends. In the north eastern boundary there is River Sharda also forming the Nepal India border and on south western part there is River Sharda as well as River Ghagra. The proposed core area of the Reserve is 1089km2 and the proposed buffer area is 627km2. The elevation of the area lies between 168 to 175 meters over the sea level. As per the latest decision of government, few new areas would be reserved for tiger reservation. As per the agenda the new reserve would stretch through Khutar ranges of Shahjahanpur, Kishenpur sanctuary and Pilibhit district. The prevailing one would include Dudhwa, Katarniaghat and Kakraha range of the Bahraich division. It is stated that Kakraha, Khutar and Pilibhit is reserved forest areas which will soon be transferred into protected areas specially for the reserves.

The major attractions of Pilibhit Tiger Reserve are the wide collections of endangered and threatening species which can be rarely viewed in other places. The common species here are Indian leopard, Bengal Tiger, Hispid Hare, Swamp Deer, Bengal floricans and Swamp Francolin. It may be noted that the Tigers of Dudhwa were majorly distributed between four divisions, one major and three comparatively smaller populations. The major popular of the Dudhwa reserve is divided into Dudhwa National Park, Katarniaghat and Kishenpur wildlife sanctuaries, Pilibhit forests and south and north Kheri forests.

How to reach Pilibhit Tiger Reserve

Though there is a railway station in the Tiger reserve of Pilibhit but the same has very less connections and it is almost on the verge of closing down since the Government discourages rail travel in the reserve zone as it disturbs the free movement of the animals and may cause death of wild animals in extreme cases. Excluding this option, the nearest railhead to Pilibhit Tiger Reserve is the Pilibhit Junction Railway station which has sufficient connectivity with major cities of North India like Lucknow and Delhi. Other two railway stations near Pilibhit Tiger Reserve are Bisalpur and Puranpur which are comparatively small stations and the trains coming here are majorly from various parts of the state Uttar Pradesh.

Where to stay in Pilibhit

For the tourist who comes to visit the Pilibhit Tiger Reserve there are rest houses, lodges and huts at places very close by like Mala, Chuka, Bankatti and several other places. Almost all necessary facilities are available in these places except the fact that canteen is not present with every place. The tariff is quite nominal in each case. However, for exquisite star hotels one has to search in Pilibhit or Bareilly where there are air-conditioned semi-luxurious rooms. These hotels also have options for car hire to visit different tourist spots and Pilibhit Tiger Reserve.

The perfect time to visit Pilibhit Tiger Reserve is from the month of September to May. The rainy season is to be avoided as rains can truly ruin the visit. However, if traveling between December to February, it is better to be prepared for chilling cold. June is the hottest month and the scorching sun would also be better if avoided.